4 Corners Outdoors Backpacking, boating, camping, fishing, hiking, kayaking, off-roading, skiing and whitewater rafting in the American Southwest. From near sea level in the Mojave Desert to the 14,000 foot snow covered peaks of the Colorado Rockies the adventures are limitless. 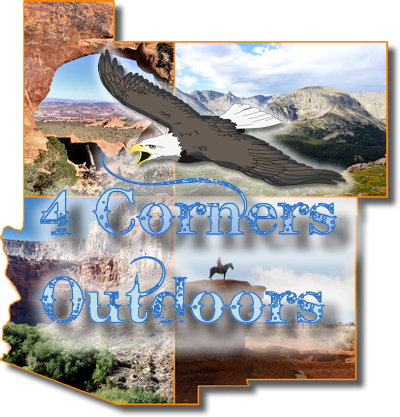 The Southwestern United States, also known as the American Southwest or simply the Southwest, is a geographic and cultural region of the United States that generally includes Arizona, Colorado New Mexico, and Utah. The geography of the region is mainly made up of four features: the Mojave, Sonoran, and Chihuahuan Deserts, and the Colorado Plateau; although there are other geographical features as well, such as a portion of the Great Basin Desert.

Colorado, Utah, Arizona, and New Mexico are the states that make up the Four Corners. Culturally, the region is a combination of Mexican, Mormon, Navajo, Hopi, Ute, and Zuni ancestry. It is a part of the Colorado Plateau, a geological formation responsible for much of the snow and rainfall over the central United States. Citizens of the United States, particularly in this region, have free access to dozens of natural areas.

The Colorado River is one of the principal rivers (along with the Rio Grande) in the Southwestern United States and northern Mexico. The 1,450-mile-long river drains an expansive, arid watershed that encompasses parts of seven states. Starting in the central Rocky Mountains of Colorado the river flows generally southwest across the Colorado Plateau and through the Grand Canyon before reaching Lake Mead on the Arizona–Nevada border, where it turns south toward the international border. After entering Mexico, the Colorado approaches the mostly dry Colorado River Delta at the tip of the Gulf of California between Baja California and Sonora.

PHOENIX – Outdoor recreation enthusiasts are encouraged to participate in the Statewide...

A moderate/easy 4wd trail in the Arizona Black Mountain foothills to an interesting Lake...

The Colorado River is one of the principal rivers in the Southwestern United States and northern...

Approximately 15 miles south of Taos, New Mexico the Taos Junction is the nexus of the Rio Pueblo...